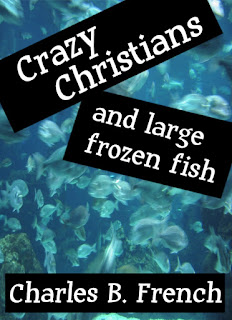 You rarely hear the phrase 'Christian Screwball Comedy,' but if such a thing exists, you'll find it here. Inspired by the comedy greats of the past, including Monty Python and Abbot and Costello, these scripts prove that Christians are their own brand of crazy. (You can see for yourself and purchase the full collection here.)


Here are the individual scripts. Unlike the full collection, none of the scripts are DRM enabled, meaning you are free to share them. If you don't have a Kindle, you can download the free Kindle app that will let you use it on all your mobile devices.


Apologetics Clinic - A Christian parody of Monty Python's 'The Argument Sketch.' A hapless patron enters the Apologetics Clinic and encounters a clerk who clearly does not know what apologetics is, and it only goes downhill from there.

Bible Shoppe Sketch - A Christian parody of Monty Python's classic 'Cheese Shop' sketch. A customer enters a shop that claims to be fully stocked with Bibles, but can't get a single one he asks for.

Biblical Business - A Businessman goes to see a Licenser about setting up a Bible-based business, and when his idea is taken, he finds that the other options aren't very good.

A Christmas Persecution - When three parishioners are barred from putting up a Nativity scene on city property, their pastor realizes that the ban was definitely justified.

Committee Sketch - A new pastor learns just how many church committees it takes to change a light bulb.

Deacon’s Interview - A church member is asked a series of increasingly odd questions when being interviewed for a position as a deacon.

Dead Pastor Sketch - A Christian parody of Monty Python's classic 'Dead Parrot Sketch.' A customer tries to return a pastor he purchased because the pastor was dead. However, the clerk refuses to concede that the pastor he sold is, in fact, dead.

Have I Got a Hymn for You! - An aspiring hymn writer can't seem to realize why his efforts are soundly rejected.

How Not to be a Martyr - A Christian is told that the only thing he'll be good at is being martyred. He is then given several options for his martyrdom.

Introduction to Evangelism Basics 101 - A frustrated instructor tries to teach his hapless students the art of evangelism. It doesn't go well.

Jesus Shop Sketch - A customer perusing the 'Jesus Shop' discovers that not all products benefit from their own 'Jesus Brand.'

Loitering - A man is accused of loitering, and the exchange just goes downhill from there.

Ministry of Public Speaking - A timid would-be evangelist tries to get public speaking lessons. Unfortunately, his teacher is, to put it politely, a complete loon. 'The King's Speech' this isn't.

On Second Thought - If the whole purpose of Jesus coming to Earth was to die for our sins, then it's pretty ridiculous to blame anyone for His death. Besides, what would have happened if they'd changed their minds?

Pirate Peacemaker and Ninja Negotiator - A pastor tries to make peace between two members of his church: a pirate and a ninja.

Rapture Store - While the Rapture can make for a very profitable business plan, this store doesn't quite have the hang of it.

Undead Evangelism - A human and his vampire friend are out spreading the Good News when they meet a zombie. Unfortunately, the human's undead biases cause a huge problem.

Who’s the Pastor? - A Christian parody of Abbot and Costello's classic 'Who's on First' routine.

These scripts are all-digital, meaning you will need a device that can read Kindle books (and any laptop, mobile or hand-held device should work for you.) Keeping these files digital helps me keep my costs low, and I can pass the savings onto you. In addition to the packs of scripts, many can be purchased individually. If you are an Amazon Prime member, you can borrow these scripts for free.

If you don't have a Kindle, you can download the free Kindle app that will let you use it on all your mobile devices.
For more of my Christian Scripts, go here for the full list.

Charles B. French
I'm a writer. I'm also a teacher, a speaker, an actor, a geek, a gamer, a Believer, a rabble-rouser, a procrastinator, a guy with big dreams and great hair, and a whole lot of other things. But I'm a writer. I knew I loved writing ever since I skipped recess in first grade to finish writing a story. Now I share what I have with you, and I hope you enjoy it.